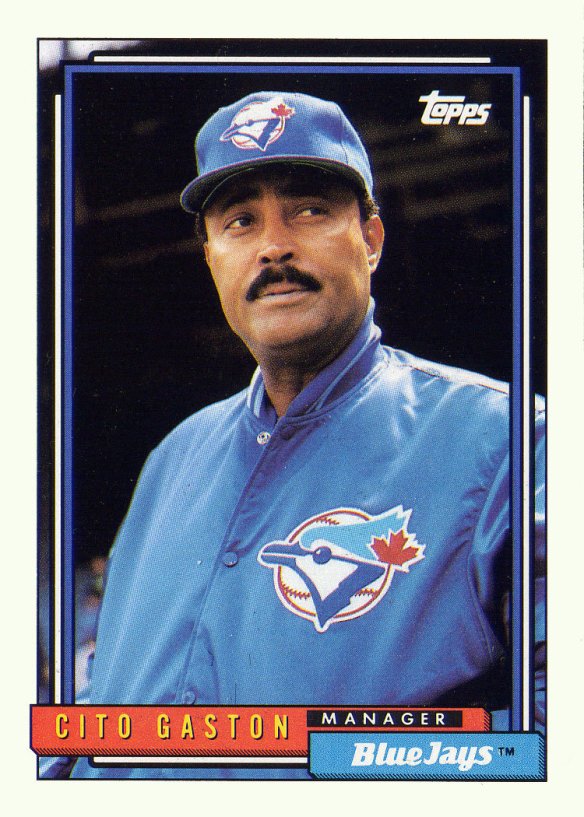 Oh, Cito. I wish it didn't have to end like this. I really do. But you've given us no choice. The panel has decided you have to go.

If you could anoint one player as a Blue Jay of the Future, who would it be?

Chris: He’s a Blue Jay of Right Now and will be “of the Future” as well: Adam Lind. I really believe he’s just going to keep on getting better.
Squizz: I’d hope whoever it was, they had a serious case of contagious talent, since this pathetic franchise needs more than one player of the future, that’s for sure. It’s weird to say Aaron Hill, since he’s already been around for a while, but he’s still only, what, 25? There’s a distinct chance his powerful year at the plate could have been a Riosian fluke, but what the hell, you’ve gotta hitch your wagon to some horse. Hill over Lind just because he’s more solid defensively and the man stole home against the Yankees.
Cole: I would like to be saying Travis Snider, but he’s still got a lot of work to do, if this season is any indication. However, then you remember that he’s only still 21 and everything will hopefully be ironed out in a couple years.
.      I just realized you might have meant who is a player on a different team that we might like to see on this team. If that’s the case, maybe Mr. Pujols likes Canada? Perhaps Hanley Ramirez wants the chance to be able to tour the CN Tower before EVERY home game? Hmmm, not so much? One can dream.
Katy: As in a franchise player? Probably Snider. Or Romero. He’s a future ace in the making I think.
Eyebleaf: Travis Snider. He is destined for stardom.
Tao of Stieb: It’s still Snider. He’s still young, and he’ll really hit his stride in the next three years.

A clerical error results in you being GM long enough to make one move this off-season. What move do you make and why?

Chris: FIRE CITO. Because he insisted on using Millar far too often. And he doesn’t really know how to do any in-game managing. but mostly because of Millar.
Squizz: I move myself to Sweden and change my identity.
Cole: Wow, that’s pretty serious business and the move would be different depending on a number of things (if Scutaro and/or Barajas have already resigned, for example).
.      I’m a little concerned in the outfield, since at this point we have Vernon Wells who is obviously going to start, Travis Snider who is likely going to start but hasn’t really proven much, Jose Bautista who I like as a super utility but definitely not as a starter and Adam Lind, who I suppose will be DH, or perhaps 1B, as Cito seems too frightened to play him in the OF.
.      That being said, we need a starting OF-er, so I loosen the old purse strings and go bring J. Bay into the fold. It would do wonders for the marketing with the whole Canada bullshit, but more importantly, he’s good at baseball. However, I’m still not convinced the Red Sox will just let him walk. Everyone is talking as if he’s automatically a free agent, but I don’t necessarily see it that way.
.      Realistically though, all of this hinges on the Jays having more payroll. So I suppose I go to Tony Viner or Nadir Mohammed or whoever calls the shots with Rogers and try to get the payroll closer to Red Sox/Yankees level.
.      Oh, if Kevin Millar is still on the team, I also make sure that’s not happening anymore. Thanks for the memories MR. MILLAR, but your ‘veteran presence’ is no longer needed – in the middle of our lineup, or anywhere near a 25 man roster that could even try to begin to convince its fanbase that it is competing.
Katy: I’d fire Cito and get a coach that actually works well with the players. The change in that dynamic alone is enough to pull the best out of what we already have, so it’s probably the cheapest solution to maximize the playing potential of everyone currently on the team.
Eyebleaf: Only one? There’s too many to make. Jason Bay. Oh Canada. Get the best players available, period.
Tao of Stieb: Fire Cito. Because I don’t know that I’m going to make it another year with him as the Manager.

Is there anything not addressed by the above questions that’d you like to say about the Jays?

Chris: This was one of the most frustrating seasons I can remember enduring. From the steep drop after the amazing start to J.P. apparently abandoning plans of competing in 2010 and watching Cito consistently mismanage games… it was a bit much. But it can only go up from here, right? Right??
Squizz: While it’s seemingly all doom and gloom, in the “little details that mean nothing but still kinda make you smile” department: Johnny Mac set an all-time career high in round-trippers this past season, with four. And he only played in 73 games! Had he been our full-time shortstop, he could have hit 8 1/2 dingers! As for the Jays in general… they frustrate the shit out of me and make me wonder why I bother caring at all… but then again, so do most other things in my life, so I think this team and I are made for each other.
Cole: I’m excited about the Alex Anthopoulos era. I am however feeling that it’s quite unlikely the Jays will field a competitive team in the next two or three years. Still though, there’s a lot to cheer for on this team and a lot of your promise.
.      The 2009 Toronto Blue Jays were an awful team, but I’m still a proud Blue Jay fan. I know I’m alone and a lot of people hopped off the proverbial bandwagon this season, but hopefully once spring returns to the air we can all enjoy once again hoping and wishing that the stars align and we can return to Toronto post-season glory.
Katy: Act like you want to win. I know it’s not entirely their fault, management sucks and ownership is more concerned with making money than winning. But if you play everyday like you’re going to get fired if you don’t perform, I think you’d see a big change. Players just need their management to believe in them, coaches and owners included. The fans already love them.
Eyebleaf: Believe. It’s a new era. The Alex Anthopoulos era. $120 million payroll!!1 Playoffs!!1 Who knows, perhaps even a pennant. Dare to dream…
Tao of Stieb: I know it is hard to conceive of this now, but I really believe that the Blue Jays have some of the pieces that will make them a winner in the coming years. (I guess I’d have to think that, or I’d go a little crazy.) Even with the crappy season that they had, one extra win every two weeks this year would have made the Jays a playoff contender. With a little luck and some smart moves to fill in the gaps, I think they can find those extra wins…and still finish third in the AL East.

And there you have it. The mammoth three-part wrap up of the Jays’ 2009 season is done. Thanks again to our wonderful contributors: Squizz, Cole, Katy, Eyebleaf and Tao of Stieb. This wouldn’t have been possible without your help.

Check back next year for the next edition of the roundtable, something which the team will hopefully force us to hold off on until November. Of course you can always come back before then if you’re so inclined.