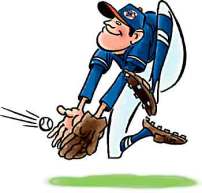 If he drops this, he'll definitely never find work in this town again.

(Cross-posted to The Daily Squizz.)

With the Major League Baseball season getting underway yesterday, it’s a yearly rite of passage for every writer with even a passing interest in the game to throw out a half-assed, half-baked bunch of theories on how to “fix” baseball — baseball, you see, is much like a sex-obsessed canine, in that everyone whinges about the semen-caked furniture, but no one has the wherewithal to actually lop off the bugger’s balls.

Well, it’s time for some big league castration, ladies and gents. No more worrying about whether “America’s pastime” has lost its lustre or appeal, since after these strategies are implemented, you can pretty much hand over the presidency to Cyborg Bud Selig (it was inevitable anyway).

Drugs for all. As in the case of Tiger Woods’s rampant infidelity, the everyday person probably doesn’t have any inherent moral aversion to steroid use; they’re just a bit peeved at the lack of fairness when someone’s juicing (or taking ‘roids — zing!) and others aren’t. More specifically, your average Cracker Jack-sucking halfwit is of the impression that the (“alleged”) steroid usage of McGwire, Clemens, et. al. is all that stopped them from making the major leagues. “Ah, that’s it, they’re all just on drugs! I coulda done that! Those cheatin’ bastards! That should be me hittin’ home runs and then assertively pointing at members of a Senate subcommittee!”

The answer? Mandatory equine steroids for all. The playing field is instantly even, the spectator schlubs are content that the game is fair, and we’re instantly relieved of the burden of watching pantywaists like Ichiro Suzuki clogging up the lineup cards.

Corked players. No, not a typo; I don’t mean corked bats, I mean that every player should actually have their rectal cavity treated like a bottle of wine, with an inflexible cylinder of cork uncomfortably jammed up there. This would eliminate the complaint, often provided by non-fans, that “nothing happens”. No longer would players listlessly sit on the dugout bench for half an hour on end; sitting would be so uncomfortable that they’d have no choice but to distract themselves with constant dancing, joke-playing and pantomimes wherein white hicks act as though they’re as smooth as their Caribbean teammates.

Also, you’d never see players mindlessly swatting at flies in the outfield or casually jogging to first base on a routine ground ball. The discomfort would be such that everyone would be constantly jittery, tweaking like they’re on a two-week meth binge (to heighten the effect, meth could be included in the league’s newfound mandatory drug policy). You’d never see 45-second gaps between pitches or the same pre-pitch warmup ritual from hitters 15 times in a row — everyone would be so desperate to close up shop and end the game that those nine innings would fly by. The players would probably volunteer part of their salaries to the broadcasters to eliminate commercial breaks, just to quicken things even more.

Only once the final out was recorded would the players be allowed to uncork, though this is certainly where the wine-bottle analogy ends.

More Yankees v.s. Red Sox. If you’re like me, 18 meetings between the squads with a combined $400 million annual payroll just ain’t enough! I mean, why are these guys wasting dates in their tiny, compressed 162-game schedule playing bum teams like the Diamondbacks and Blue Jays? They should be playing each other at least once a week. Don’t you feel the passion every time they meet? Doesn’t the mere presence of the two teams in the same building evoke thrilling memories like Pedro Martinez violently tossing an elderly, rotund Don Zimmer to the ground, or the gurgling bile drawn to your esophagus upon seeing a cleanly-shaved Johnny Damon sporting the pinstripes for the first time? On this note…

Re-aligned divisions. There’s been some talk of this recently, as a way of ensuring that the Red Sox and Yankees would meet in the playoffs helping to increase parity in divisions with a few powerhouse teams. But really, is spreading the actual talent thinner across the entire league actually going to serve to increase interest? I think not. Instead, quit playing around and just give people the divisions they actually want…
American League East: Boston, New York, maybe Anaheim if they’d spend some money for God’s sake
American League Rest: All other teams, excepting Toronto
American League North: Toronto
National League: Eliminated altogether.

New rules for fans. Now that the players are all drugged-up zombies, the games are remarkably quick and efficient and the playoff races are only being contested by the teams that actually matter, there’s only one thing left to do: standardize and solidify the in-stadium rules that bring people back to the ballpark week after week.

Also, more varieties of merchandise. I’ve found that 45 different colour combinations for jerseys and hats just aren’t enough. In fact, fans shouldn’t actually be able to purchase merchandise that comes in the actual official colours of the team; the standard combo should be pink and turquoise, with a premium being charged for any palette that’s less garish.

Lastly, a standard public address system volume of 120 decibels, at all times, in all stadiums. The problem with television isn’t the loud advertisements; it’s the unexpected change in volume that disturbs our sensibilities. So there should be pre-recorded organ music and tinny beckoning to “make noise!” blaring into the stadium at all times, including during the course of play. This will ensure a uniform level of deafness amongst all fans, and prevent them from being able to discuss the preposterous abomination they just witnessed.