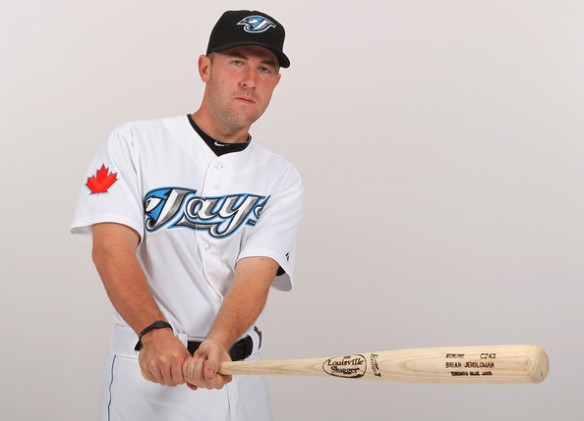 Watching last night’s Jays game, I was a little surprised to see both Jose Molina and J.P. Arencibia in the starting lineup. “What happens if Molina goes down?” I thought to myself. “Is John Farrell really OK with giving up the DH spot that easily?”

“Wait… isn’t Brian Jeroloman on the bench? He can’t be, can he? I mean, he’d have to have played by now, and I’m sure I’d have heard about that.”

The head cold I’ve been dealing with was enough to keep me on the couch and keep me from looking it up, but waiting over night saved me from doing any research. John Lott answered my questions for me.

Yes, Brian Jeroloman was on the bench. He has been since Aug. 23. And no, he hasn’t seen any game action yet.

Normally, when a young player gets a call to the majors and spends a lot of time on the bench, there’s a call for him to get some playing time to “see what we’ve got in him.” Jeroloman is different though.

Alex Anthopoulos said at the time of his call-up that Jeroloman wouldn’t play. Farrell has said that Molina and Arencibia have earned the little playing time that remains. The coach and GM have stuck to their word — so much so that it’s sometimes hard to remember that Jeroloman is in fact in the major leagues right now.

So, if he’s not playing, why are the Jays paying Jeroloman a major-league salary to sit on the bench? The guy is almost definitely not Toronto’s catcher of the future, after all.

But that may be the exact reason he’s with the big club right now.

With Arencibia holding his own to the point that there’s some minor rookie-of-the-year movement behind him and with the steam train that is Travis D’arnaud making his way through Toronto’s farm system, it would seem that the best possible outcome for Jeroloman — in a Jays uniform, anyway — is the role of backup catcher.

What better way to prepare for that role than riding the pine? Well, playing would obviously be better. But if the options are going home or travelling with and learning the art of calling a game from Molina, a guy who’s pretty good at catching, then travelling, learning and enjoy the post-game spread is probably the way to go.

And with Molina’s expiring contract and Type-B status, there’s a chance Jeroloman may even be the backup catcher as soon as next season.

So, as the Jays get ready for their final game of the season this afternoon, it’d be nice if Jeroloman got a little playing time to, you know, see what we’ve got in him.

1 thought on “Backup of the future”