I like baseball on TV. Not that going to a game isn’t a thrill, because the arc of the ball, as viewed from field level, is unique to me. There is something special about the tumbling seams on a pop-fly, or the rapidly receding circle of a double into the gap. I think that those views are special to me because I only go to a few games a year, at most. My season tickets are with my LCD tv.

Pitching, on television, is nothing like pitching live. I know, because I umpired minor (kids and teenagers) baseball for three years. It is the closest you can possibly get to pitching and catching, and not be responsible for touching the ball. There is a very real hiss to a baseball coming in at anything over 50mph. The impact into the mitt of a 60 or 70 mph fastball is something that reverberates in your ears. You can feel it when it hits the mitt. To lean into that at MLB game speed would make me flinch.

I know that my eyes and ears could not tell me the whole story as an umpire. All I had to focus on was where the ball was when it hit the front edge of the plate. That isn’t really hard to do, with a little practice. Measuring what happened before and after that never really entered my head at the time.

I also know that the single outfield camera does not convey or measure what is going on at home plate. It just isn’t in the right place, or at the right distance to really tell how and where a pitcher releases the ball.

Combine these methods with the play-by-play and colour announcers on TV, and everything gets jumbled up. Some fastballs have ‘late life’, some have ‘hard sinking action’, some are ‘backdoor cutters’. Cute, but how do you tell which of those descriptions is anywhere near accurate? None of the guys in the booth has crouched down to catch the pitcher in question, they are relying on a story from someone else. And if you’ve ever tried to convey a story through two or three people, you know how any description can get jumbled up.

Pitch f/x to the rescue. If you are not familiar with pitch f/x, there is a primer here. All of my data comes from the very comprehensive data at brooksbaseball.net. Very briefly, 2 cameras are positioned in each park to give accurate data about the behavior of every pitch thrown in the Major Leagues.

I have 2 charts to compare the fastballs of the current five members of the Toronto Blue Jays rotation. As of this writing, they are Ricky Romero, Brandon Morrow, Henderson Alvarez, Kyle Drabek and Drew Hutchison.They are identified by their initials in the charts.

Taken as an average from all pitches thrown in 2012. This is pretty much just speed differences. I was hoping, when I input the data for spin direction, that the sinkers would cluster apart from the four seamers. Not so lucky. And can you tell I haven’t made any charts since my second year at community college? But enough about me. Four seamers are blue data points, sinkers (usually thrown with 2 seam grip), are in red. Kyle Drabek is the only one who throws enough cutters to be of any note. That’s the yellow diamond. Notable points, Henderson Alvarez is the hard thrower of the bunch, not Brandon Morrow, as you may have guessed. Drabek next, then Morrow. These are all above 94mph and are very good fastballs, especially for MLB starters. The other odd thing is Drabek’s two data points are very close together in the MPH, unlike a typical pitcher, changing to the sinker grip doesn’t cost him even 0.5 mph. 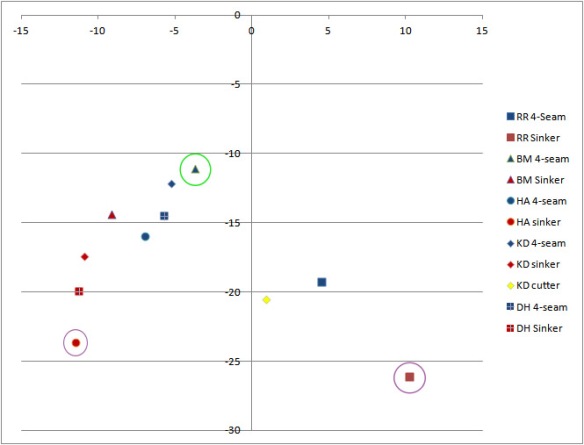 This chart shows us movement from the catcher’s perspective. It tells us that Rickey Romero may, in fact, be left-handed. I’ll check into that later. Also, the two purple circles are Romero’s and Alvarez’s sinkers. Getting ground balls happens naturally, as even mistakes are carried down under the bat quite often. The green circle is Morrow’s ‘rising’ fastball, and it makes it easy to see why he’s a natural fly ball pitcher. Here we can cross-check if Drabek’s sinker (which we saw him throwing extremely hard, above) has had any of its movement cancelled out by his extra velocity. I would have to say no. The distance between his straight and sinker data points is similar to both Morrow’s and Hutchison’s. Also, Drabek’s cutter does, in fact, cut its way back across the middle of the chart with a little reverse break.

So, next time somebody tells you who they think throws the hardest, now you’ve got some pictures to back up your own arguments. This also gives an idea of how far from straight even a ‘straight’ four-seam fastball can be.

If anybody would like to see any other pitch types broken down this way, or two pitchers and their pitch mixes put head-to-head, put it in the comments, and I’ll try to cook something up.