I must begin by saying that this is all possible due to the wonderful work of Brooks Baseball, and, most importantly, the new Hitter Profiles tool which was released this last week… all the graphics come from this handy website. It allows you to search, by many, many different criteria, the hitters results in the Pitch f/x era (2007 onward). This is data that was formerly left to the nebulous realm of spreadsheet function creators. No more years of study. Now, click a few drop down menus and BAM! you’re looking at graphical representations of any hitter’s performance.

And you can learn a lot of things in a short period of time. Allow me to show you some pictures I’ve snapped from the above website. Which you should also go to, and possibly waste a bunch of time on…. not that I did that already.

Let’s look at two guys who were just in the Home Run Derby. These were, in fact, the 2 finalists, Jose Bautista, and Prince Fielder. Here are their Slugging Percentages by areas in the strike zone. Bautista is on the left. Fielder, the right. Redder is better. 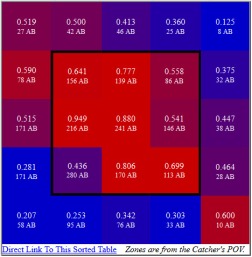 Both of these fellows hit the ball very hard, but you could have guessed that anyway. What I found interesting is that there are some red zones at the left side of both graphs, and both are from the catcher’s perspective. Bautista bats right handed, Fielder from the left. Bautista would like pitchers to bust him inside, in 62 AB that have ended on a pitch right on his hands, he’s collected 31 total bases. Fielder, meanwhile, is waiting to pounce on pitches that are away in the zone. He’s slugging .949 on belt high, outer third. You would be slightly better off to just throw one right down the middle, only an .880 SLG there. If a pitcher gets it off the plate, but hangs it, Prince still pounds out a .515 slugging!

We can also look at the home run locations of these 2 hitters. 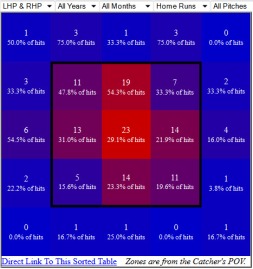 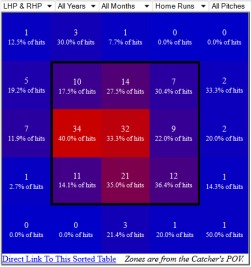 Both of these guys have 50 homer seasons under their belts, and we can see they confine most of their dingers to contact in the zone. Fielder likes to get his middle to middle away, whereas Bautista will crush balls just about anywhere but down and in.

Let’s have a little fun. Here’s the profile of another hitter – the infamous Player X, to show how different skills can make a good hitter. Or, in this case, a great one.

Above left, the same SLG% graph as in our first example, on the right, his HR graph. Player X is a lefty, like Fielder. He’s never hit more than 40 homers, so his numbers there aren’t as impressive as our other 2 hitters, but his SLG graph is just as dangerous looking. Like Jose, he will turn on the inside pitch with more confidence than on the outer half. There’s something that Player X has up his sleeve that Bautista can’t compete with, his abilities to hit things that are not home runs. Below is Bautista’s batting average by zone. 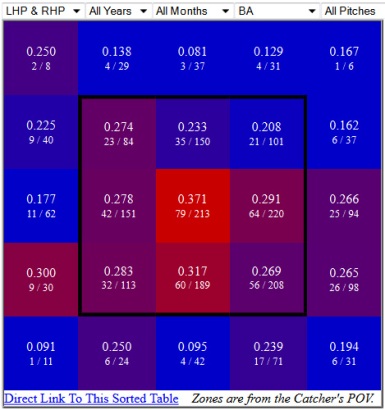 If he’s not homering, you can get him out up, or up and away, and often down low.

Robinson Cano, as a contrasting example, is regarded as a good hitter for average. He doesn’t walk much, but he’s hit around .300 for most of his career, he has modest power, but isn’t a prototypical slugger. 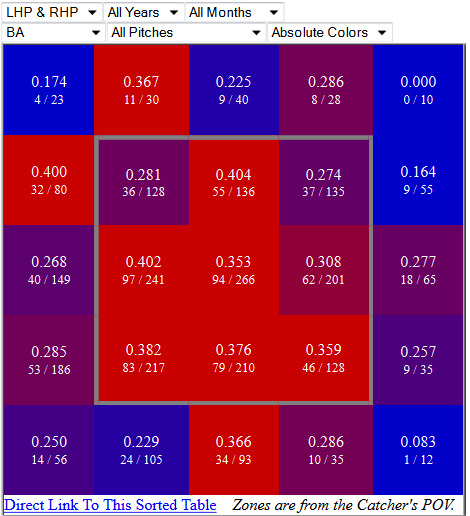 That’s a lot more red, and shows his markedly better ability to get hits, especially in the zone.

There’s an old idea that says sacrificing power can, as a rule, give you a better chance to hit for average, and vice versa.

Player X laughs in the face of that idea. His BA graph below.

Yes, every part of the strike zone is a red zone for Player X. When he ends and at bat with a ball in the zone, his worst result is a .317 BA. When he takes a cut at pitches at his knees, his BA is .360. He has fantastic plate coverage, and a great eye. And also a huge contract.

Player X is not, as some of you are guessing, Albert Pujols. Put your guess in the comments and then scroll down, for the identity of Player X.