Baseball without a clock, is viewed, I believe, a little differently than other sports. When one team goes ahead early, it obviously reduces the chance of that team winning the game. Unlike football, say, when you can take a knee late in the game because things are out of reach in the small amount of time left, in baseball, hope exists (however faint) until the 27 out is recorded. When I was a child, I always cheered like my team had great hopes to win, even down by four or five runs, heading into the bottom of the 9th. Three outs left? I always assumed, if you just kept hitting, you could win any game, no matter how late.

Thousands of games later, and I’ve come to realize that comebacks, especially those from a deep deficit are very, very rare. Possible, yes, but rarer than I even imagined. Which makes them all the more significant to me. Baseball is a monotonous 162 game grind, punctuated by small bouts of insane activity. When one of those moments comes, I’m not going to miss an opportunity to romaniticize it. And the best way I know to turn baseball into poetry, is with a line graph. 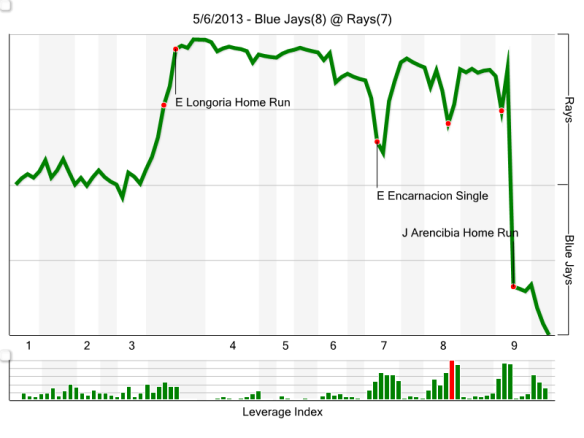 Yeah, I must be a real hit with the ladies, getting all mathy and chartish when something gets me feeling good. For those of you not familiar with the Win Probability system that Fangraphs is illustrating here, it’s pretty simple. The line represents the chance of either team winning, Tampa’s chances are best when the line is at the top of the graph, Toronto’s are best when the line is near the bottom.

How do we know these odds? Well, luckily, there are thousands of games that have been recorded over the years, and each out is like a tick of the clock in the game. We look at the ‘clock’, say at the start of the fourth inning, and check the score. In this case, 7-0 Tampa. We then look at all games in the records that had a score of 7-0 for the home team at the start of the 4th, and then check the final score for the winner. In this case 98.1% of the games with that score in that situation resulted in a win for the team that was ahead.

98.1% is a really high number, isn’t it? To put it differently, if there had been an opportunity to replay the remainder of this game 1000 times, starting with the Jays batting in the top of the fourth, they would have lost 981, and won 19 of them. That’s one win for every 50 losses. When I see a 7-0 deficit on the scoreboard, I feel as if a team is in really big trouble, but my brain just doesn’t assume that the chances are actually 50:1 against, less than halfway through the game.

Even with all the chipping away at the lead, the Blue Jays were still in a very tough spot in the 9th inning. They were still down 7-6. With 2 outs, and a runner on third, J.P. Arencibia represented the final out that Fernando Rodney needed. This guy: 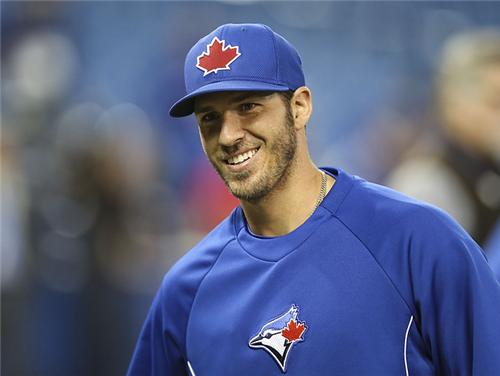 J.P. gets himself into a 2-2 count. The Blue Jays are down to their last strike.

Down to their last strike. One of my favourite baseball phrases. It reperesents a moment o near certainty. If you miss this next srike, all is lost. But ‘last’ is a relative term. If you reach base, then the next batter starts off with 0 strikes. That means that your last strike is not always your last strike, and it kind of feels like you’ve just turned back time, just a little bit, to some time a couple of pitches earlier than before. Now where else in life can you nudge the clock backwards like that?

The other thing about strikes, is sometimes, when everything is going your way, you only need one.

In numbered order, here are the pitches Rodney threw to Arencibia.

Pitch number 5 was a fastball, and it was probably supposed to jam J.P. Instead, it ended up in his happy place, and, to his credit he didn’t miss it, even at about 97 mph. It left the yard, and in doing so, took the Jays chances of winning from 12 percent to 84%. One swing, and the Jays had the odds in their favour for the first time in 3 hours.

Madness in Jays land. Just like we all dreamed it could be.

Now, the next 50 times they find themselves down by 7 runs, I won’t blame them if they don’t claw and scratch their way to victory. My blood pressure can’t stand that kind of treatment any more often, anyway.